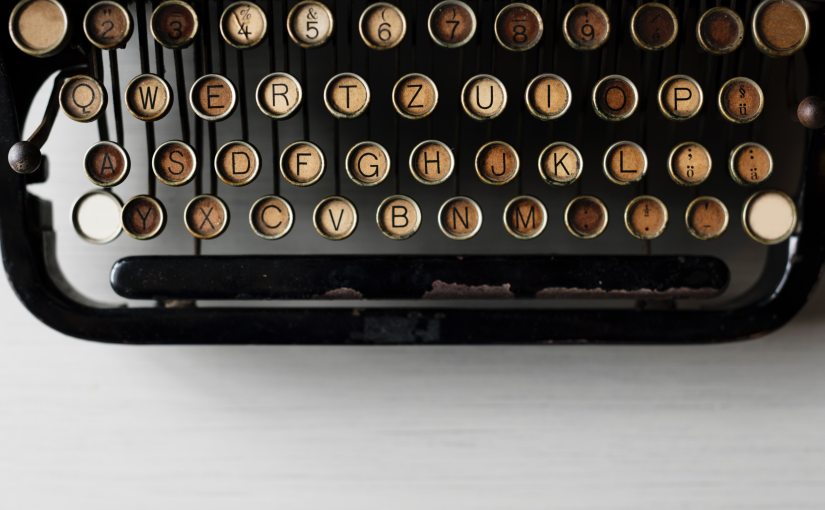 I’ve been quiet on this research lately because I’ve been preparing to go to the county in which my 3x great-grandparents John Kelley and Eliza Hurd were married.

This is my first time traveling to a location to conduct research, and it’s a lot of work. So many questions have come up. How will I know I will find something new when I get there? What will I need to bring with me? Where are the best places to do my research there? How much time will I need to accomplish my goals?

The answers are all “I don’t know. We’ll play it by ear.”

I’ve found some advice on other researchers’ blogs. Most of them say to make a research plan before you go so you stay on task. That makes sense; it’s easy to get distracted by all of the shiny resources at a new library.

I’ve decided my main question to answer will be “Who are John Kelley’s parents?”

Before I made that my goal, I had planned to visit 6 libraries in 4 counties. I wanted to chase all of the leads. But a second piece of advice—Review the information you have—made me realize that I don’t know much about these two ancestors. Here’s what I know for sure:

• John Kelley and Eliza Hurd were married in Champaign County, Ohio, in 1854 by a justice of the peace.

• Eliza Hurd definitely lived in that county in 1850. She was a local.

Not much to go on. I feel like it’s a pretty safe assumption that John was local, too. It’s at least more likely.

So I pared back the number of libraries and genealogy centers I was going to visit and focused on Champaign County. Because of that, I cancelled my reservation at a nice lake house in Logan County, one county north, and instead booked a very nice apartment in downtown Urbana. Those other locations are still researching possibilities, but I’m going to let what I find in Champaign County tell me where to go.

Another bit of advice was to take stock of the missing research in your records and try to fill in the gaps before you conduct research on site. Like, if you’re missing a census or marriage record, it’s a better use of time to find them online beforehand.

As a result of this advice, I’ve been reading up on Champaign County history. On the Library of Congress web site, I found this landowners map from 1858, four years after my great-grandparents moved to Iowa. 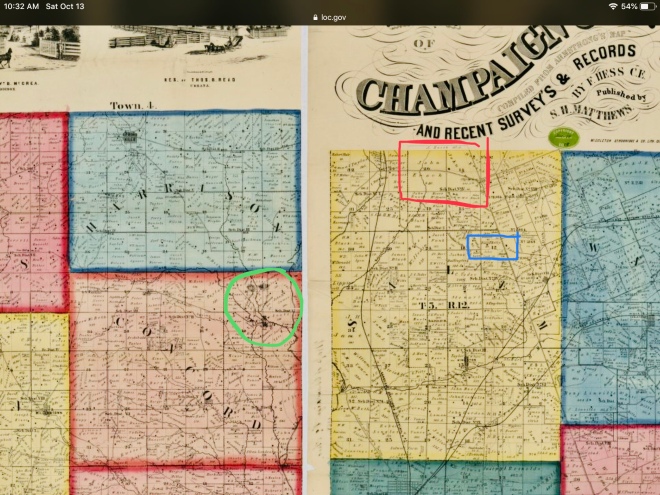 You’re looking at Salem (yellow), Concord (pink), and Harrison (blue) townships in Champaign County. I’ve boxed and circled a few things on the map since the type is so tiny.

The blue box underneath is a farm owned by Colonel David Kelly. I should say that there was no difference between Kelly and Kelley back then. This is all taking place before the spellings of names were standardized. After combing through the map, David is the only Kelly listed as a landowner in this county. I have DNA matches to two of David Kelly’s sons. These Kellys have Osborn relatives, and there are several women named Arietta among David’s nieces and granddaughters. Osborn and Arietta are names John and Eliza gave to two of their children.

The green circle is where I believe Eliza Hurd lived, based on her father’s listed neighbors in the 1850 census. So Eliza and this John lived pretty close together, right? They easily could have met in town or at church.

I don’t know if the John Kelley on the Enoch farm is my dude. I don’t know how the Enochs and David Kelly are related to me; I just know that it can’t be a coincidence that I have genetic ties to both of these families. So, this is my researching starting point:

• Dig into the David Kelley family tree. There were so many John Kelleys in that family. Hopefully, it won’t be hard to find my guy.

David Kelly and John Enoch were both considered early pioneers of the county, so I’m hoping there’s a lot of documentation on their lives at the library. Eliza’s uncle, John Hurd, is listed as a prominent member of the community in that same county history book. I also learned that the Hurds were pioneers of Clark County, Ohio, the county to the south of Champaign. Hopefully there’s a lot of records on them as well.

And that’s my plan. I hope to also visit the Ohio Caverns near the old Kelly farm and the Piatt castles while I’m there. And I’m going during my favorite time of year, so I hope to visit an orchard and score some cider house donuts!

4 thoughts on “Going There: The Two John Kelleys, Part 14”